Due to storm warning all parks of Peterhof, Oranienbaum & Alexandria are closed on November 19th. Museums are open as usual.

Throughout the history of the Oranienbaum residence a suite of the ground floor rooms in the west wing of the Grand Menshikov Palace has been commonly referred to as “the Vorontsova’s part” or “the Apartments of Vorontsova”. It was in 1758-1759 when a modest service area of Menshikov time gave place to sumptuous public and private rooms of the lady in waiting Elizabeth Vorontsova, the official mistress of the Grand Duke Peter Feodorovich, future Emperor Peter III. 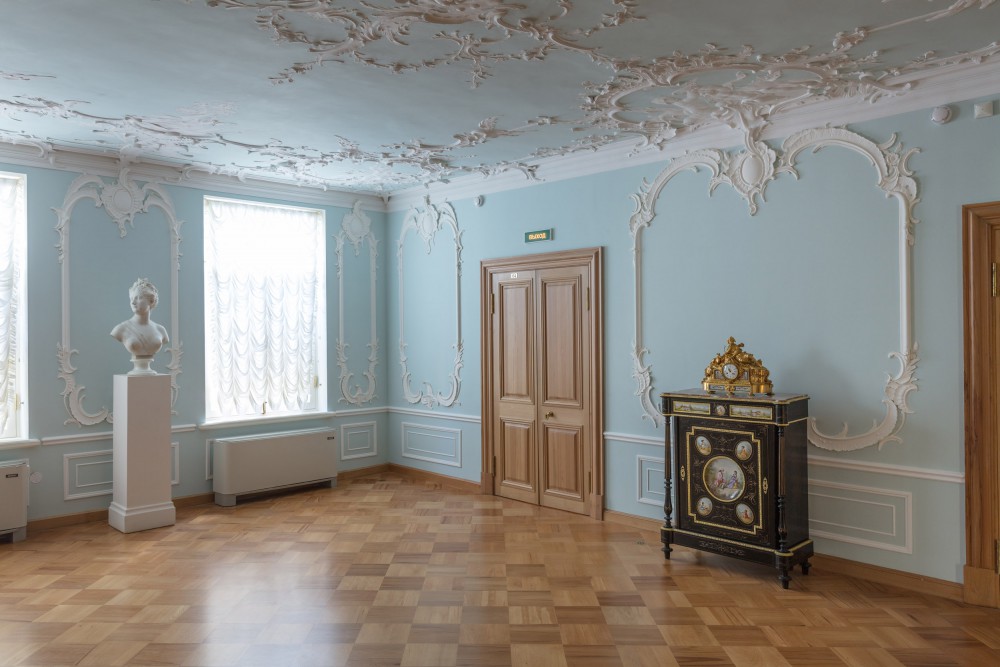 Restoration of the Vorontsova’s part started in 2015 by order and with financial support of the North-Wester Directorate for Construction, Reconstruction and Restoration. After the restoration had been finished the items of applied arts from the Peterhof’s collection were added to decorate the halls. On June 29th four rooms were shown to public and press: the Hall of Diana, the Vorontsova’s Bedchamber, the Golden Cabinet, and the Cabinet of George the Duke of Mecklenburg-Strelitz. 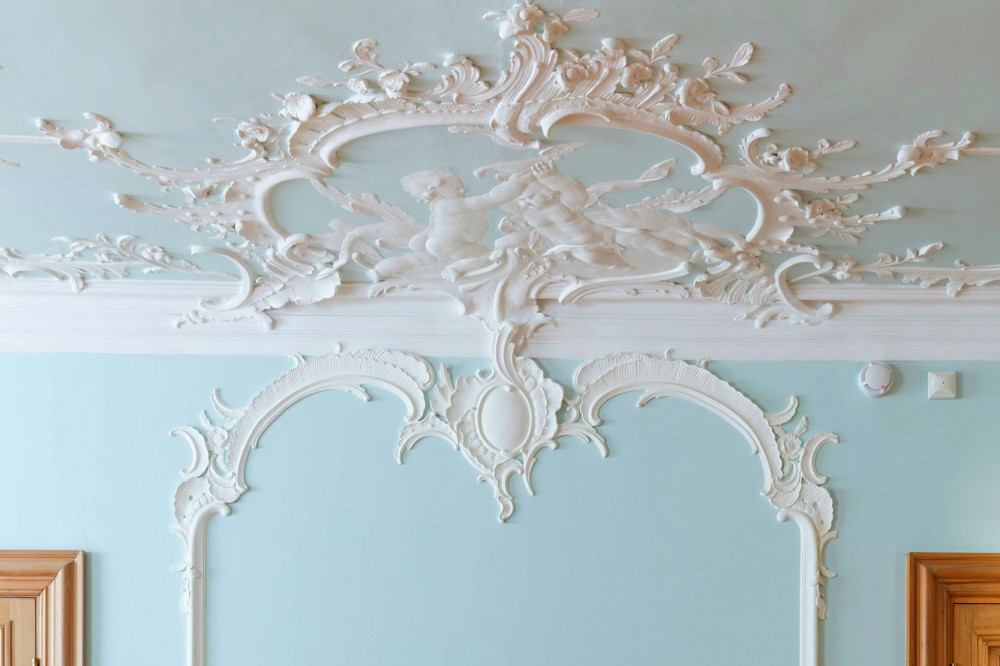 Main treasure of the Hall of Diana is the plasterwork ceiling in Rococo style, well preserved from 1750s. The plafond was completed in 1759 to the design of Giovanni Gianni, who was one of the leading modelers in St. Petersburgh in times of Empress Elizabeth Petrovna. Hunting motifs of the plafond bear an allegorical mening. It originates from the long tradition at European courts to associate the image of Diana, the maiden goddess of hunting and the moon, with influential royal mistresses. 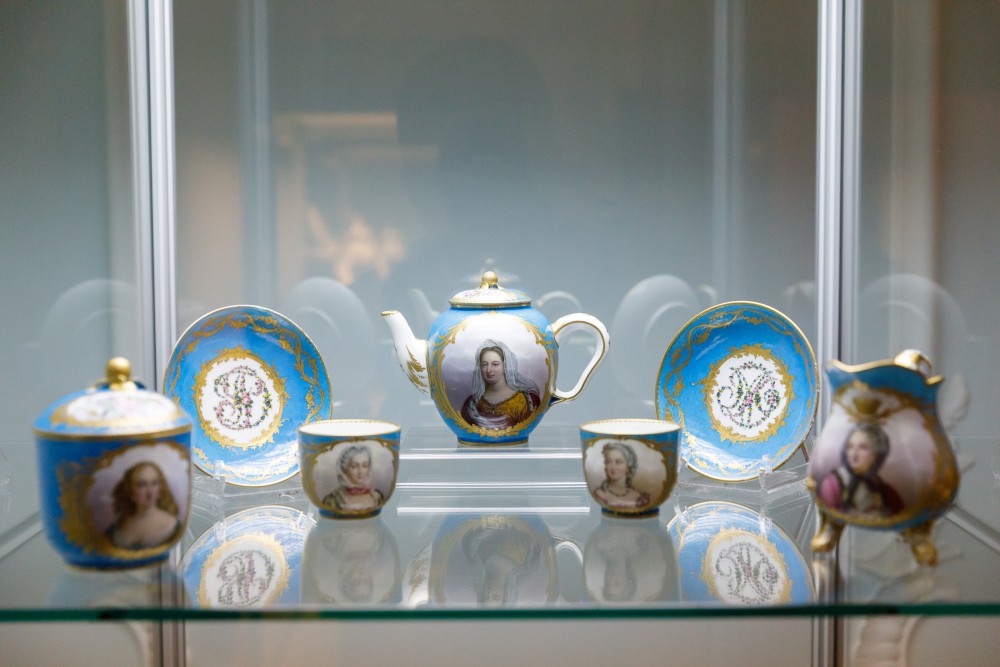 In 1770-1780s Vorontsova’s Bedchamber in the south part of the suit was rearranged as the private rooms for Empress Catherine II. Probably the preserved ceiling painting also originates from that time when the supervision of the works in Oranienbaum was passed to Antonio Rinaldi, so this plafond composed of circle-placed medallions with laurel and floral wreaths was probably designed by this famous Russian-Italian architect. 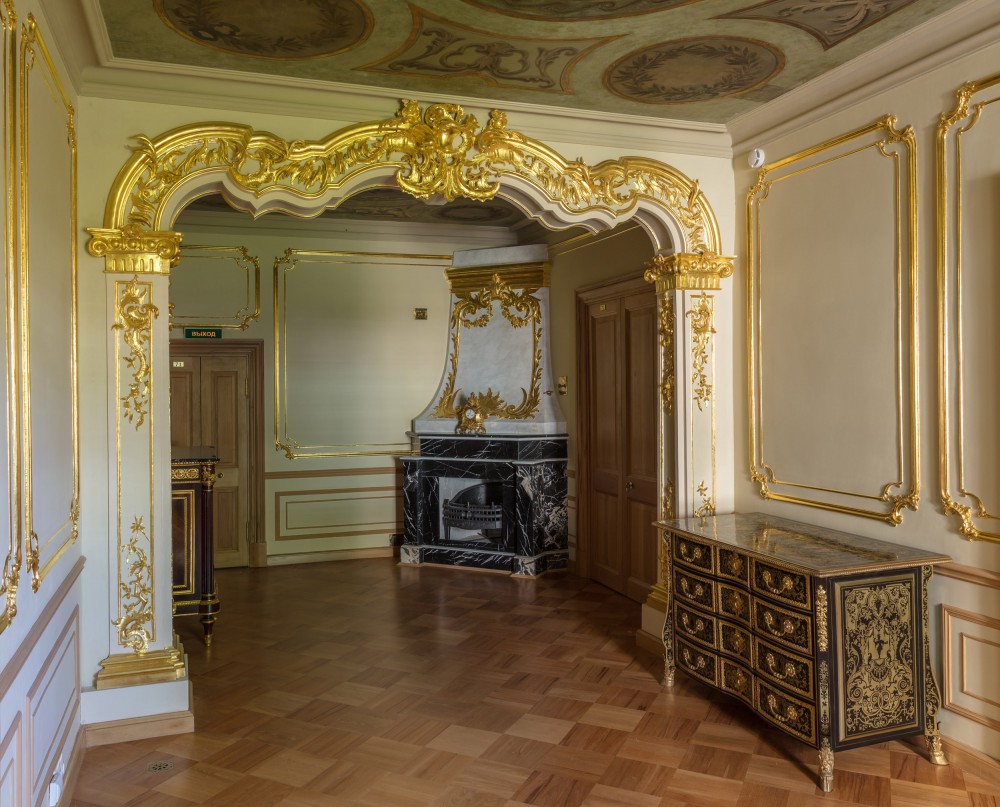 During the 1900s alteration the original décor of the room was partly lost, but one thing remained untouched. It’s a door in the east wall that hides a small spiral staircase which once linked Vorontsova’s Bedchamber with the private quarters of the Emperor Peter III. 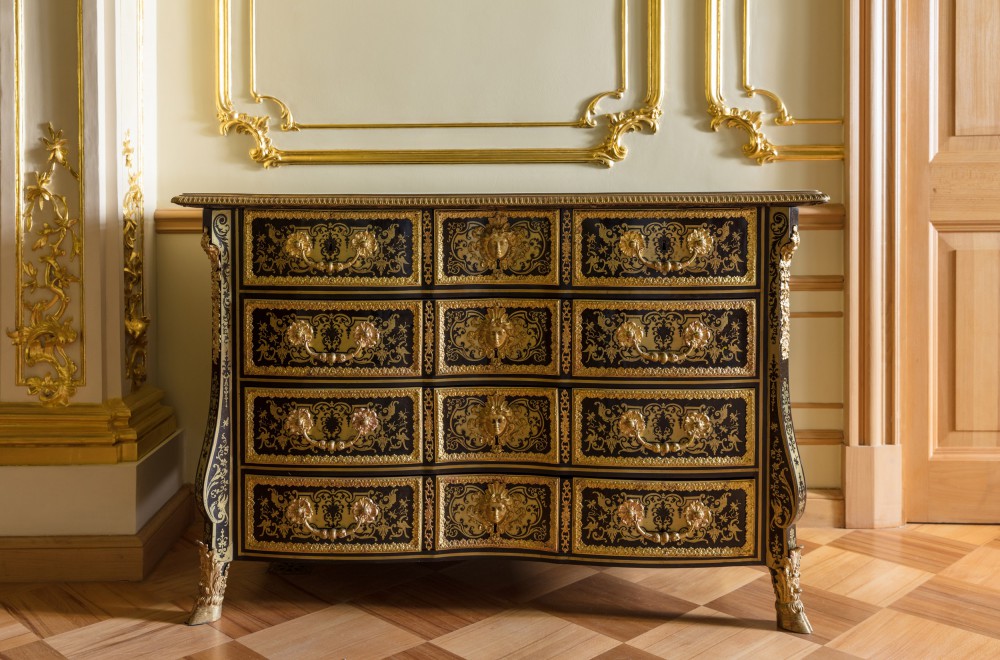 The Golden Cabinet is adjusted to the bedchamber by a narrow doorway, once embellished with carving. In 1758-1759 the Cabinet was decorated with gilded carved paneling that was later replaced by the stucco décor in Rococo style. The lavishness of gilt stucco work on the ceiling mostly survived to this day and gave the interior its modern name. 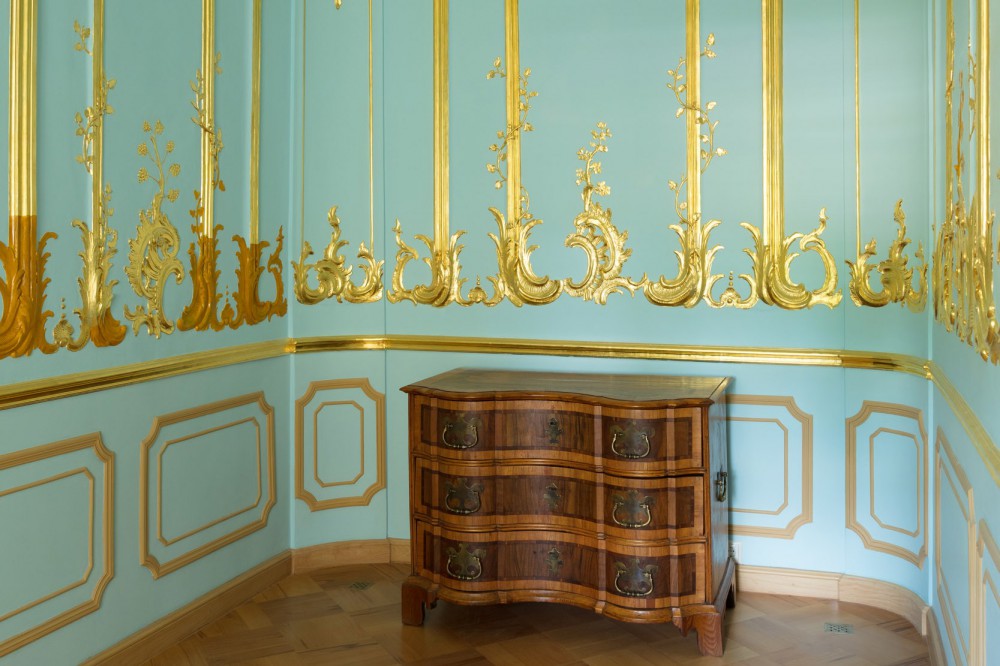 In the end of the XIX century the Vorontsova’s Chambers were rearranged into the private apartments of the family of George, the Duke of Mecklenburg-Strelitz, the last owners of Oranienbaum estate and the grandson of Emperor Paul. The Study of Duke George has preserved an interior finish of the end of the XIX century: a plaster décor in Rococo style on the walls and ceiling, an artificial marble mantelpiece. On display here are items typical for the male study setting of that time: a writing table and an armchair, a desk, a glass cane, gramophone (England, early XX century), and phonograph (USA, 1900s). 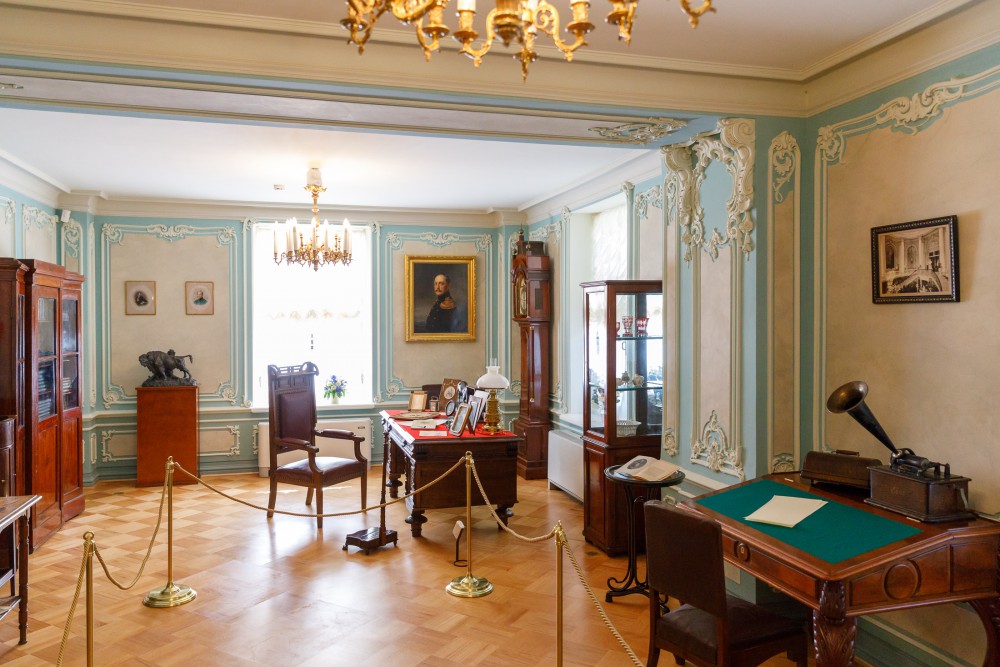 Nowadays the highlight of the recreated sitting is the walnut table decorated with views of Oranienbaum, which preserves from the original finishing of the study. This artwork was created using pyrography technique by Russian cabinet makers of the early XX century. 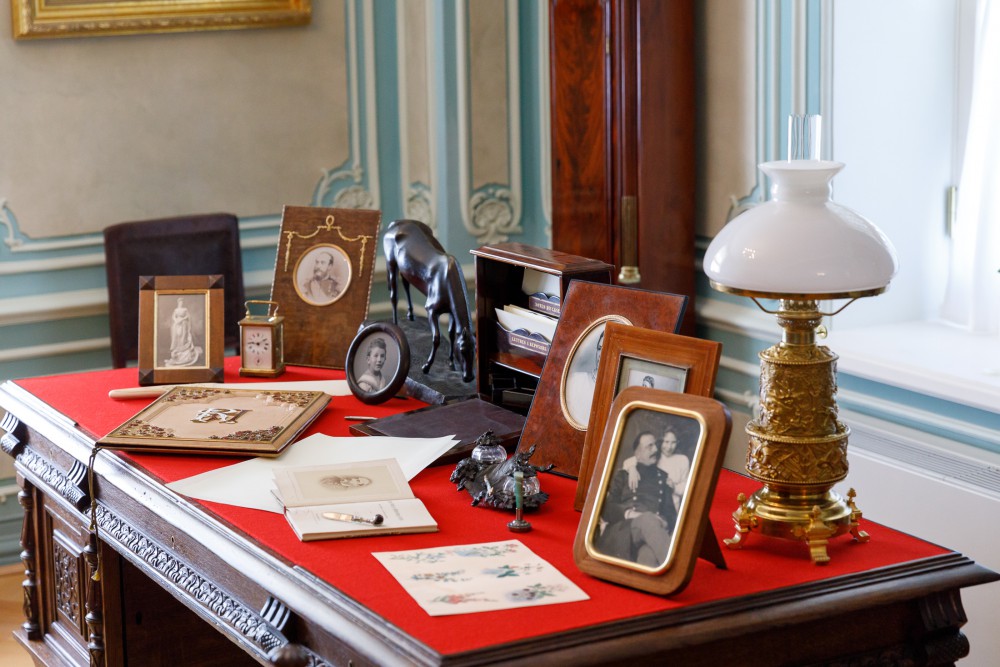