Strelna is one of the most ancient settlements on the south bank of the Gulf of Finland. This name is derived from the river Strelka flowing in the area, that acquired its name thanks to its fast flow - the Slavic root "-str-" means "flow" or "movement". The first inhabitants of these places, in the VII - VIII century, were Finno-Ugric, Izhorians and Votes. The Slavs started settling here later.

In 1617, under to the conditions of the "Stolbovsky peace" with Sweden, Strelna together with other Russian settlements, became part of the Swedish kingdom, and these lands received the name of Ingermanlandia. But already in 1703, during the Northern war, Russia redeemed the south bank of the Gulf of Finland. The Strelna homestead became Peter I's personal property.

On the 13th of January 1711, Menshikov received the Eemperor's order to build in Strelna, a couple of peasant houses, cattle and poultry yards and a "small zone for the fish". Soon appeared the homestead and the palace. Peter I even decided to create in Strelna a grand palace-park ensemble with fountains and cascades. He began the construction of the stone palace and the park, but soon realized that, the far more favorable conditions for this project's implementation, were in Peterhof. The grand construction was moved there, and Strelna practically lost its full financing. The park did not receive its needed attention and the stone palace became unpopular. Even the members of the imperial family would prefer the wooden palace, when staying in Strelna, on the way to Peterhof. Strelna entered the epoch of decadence.

This epoch finished together with the XVIII century, when, at the decree of Emperor Paul I, Strelna became the property of his son, the Grand Duke Konstantin Pavlovich. The reconstruction of the stone palace and of the park had commenced. After the Grand Duke's death in 1831, Strelna was inherited by the emperor Nicholas’s second son - the Grand Duke Konstantin Nikolaevich. The positions of Navy minister and Head of the State Council, took some much of his time and effort, that the main responsibilities of managing the Strelna homestead fell on the shoulder's of his spouse, Alexandra Iosifovna. Thanks to her caring hands, the estate started flourishing : new park constructions have appeared, the farm has expanded, lush receptions and musical evenings, with brilliant N.A. Rimsky-Korsakov, Johann Strauss and many others, started to be held here.

The last owner of Strelna was the younger son of Konstantin Nikolaevich and Alexandra Iosifovna, the Grand Duke Dmitry Konstantinovich. The hospital and the Strelna's fire brigade were kept under his patronage. At his invitations, Strelna was visited by saint Ioann Kronschtadtsky, singer F. Shalyapin as well as poets A. Akhmatova and A. Block. After the revolution, in 1919, Dmitry Konstantinovich was arrested and shot, in Peter and Paul's fortress. With the arrival of the Soviet authority, the Grand Duke's residence accommodated the school-colony for the troubled teens. After the Second World War, the Leningrad Arctic school was opened here. The destiny of the palace changed drastically in 2001.

At the decree of the President of Russia V.V. Putin, the former Strelna homestead acquired a status of the State complex of the "Palace of Congress", combining the functions of state residence, museum and business center. The reconstruction works had finished on short terms, by May 2003, when St. Petersburg solemnly celebrated its 300 year anniversary. The Konstantin's Palace relived and Strelna became a "diplomatic window to Europe" acquiring world-wide prominence. 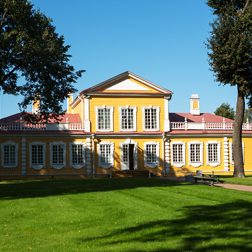 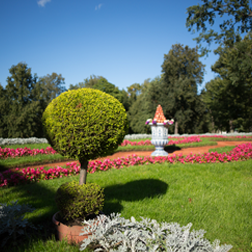