Pavilions on the Kolonistsky's park Islands
The Tsarina's Pavilion on the similar titled island of the Olga's Pond in the Colonists' Park was completed
Nicholas I presents Olga's Pavilion to his middle daughter, Grand Duchess Olga Nikolaevna for her wedding with Prince Karl of Wurttemberg
the production of the ballet «Thetis and Peleus» on the Olga's Pond in honor of the visit of the German Kaiser Wilhelm II (the main part was performed by Mathilde Kschessinska)
1844
1846
1897

The impressive ensembles of Olga's and Tsarina's islands were created between the years 1830 to 1840, on the order of the emperor Nicholas I. They are dedicated to his spouse Aleksandra Feodorovna, and their daughter Olga. Diverse in decoration and emotional impact, they would not leave anyone indifferent. Their authors, architect A.I. Stackenschneider and a talented garden master P.I. Ehrler, created on the small artificial islands of the Olga's Pond, cozy gardens with pavilions, resembling the villas of the antique Pompeii and the South Italy suburban houses of the XVIII сentury.

One can begin the walk around the Tsarina's island with the viewing of the floral compositions. The large marble bench, is decorated with sculptural depictions of the antique gods: Jupiter, Hera, Ceres and Flora. It separates the garden, in front of the south facade of the Tsarina's pavilion, by the sea side. There is a flower bed between the bench and the pavilion, with a fountain in the marble basin in the center of it. In the bowl of the fountain, there is a statue of Narcissus, admiring his beautiful reflection in the water.

Heartwarming in his purity, the "Praying boy", set in the niche of the pavilion - is the Roman copy of the Greek original of the 4th Century BC, found on the Rhodes island. In the XVIII сentury, this sculpture was acquired by the Prussian king Friedrich the Great, while in the XIX century, one of the copies adorned the south facade of the Tsarina's pavilion.

The empress Alexandra Feodororovna loved flowers, and was fond of gardening. There are many flowers, especially in the Private garden, in front of the northern facade of the pavilion. Flowers including roses of the ancient kind, grown in the XIX century. Part of these roses was brought from Germany, in honour of the 300 year anniversary of Peterhof. They were planted on the order of the baroness Clotilde von Rintelen, the granddaughter of the emperor Alexander II, together with the great-grand daughter of A.S. Pushkin. The plants were the unchangeable attributes of the island garden, placed in pots and marble vases. The may-lily, olive, banana, agave, laurel and orange trees, were kept in the tubs. During the summer, the flower decorations were replaced, three times.

The most unusual decoration of the Tsarina's island, is a mysteriously shimmering 5 meter tall column. It is made from blue and milk glass tubes, and is toped by the gilded sculpture of "A Girl Feeding a Parrot with Grapes".

The Pavilion was used by the Tsar family only in summer time. To reach the island, they needed to cross by boats or with a special ferry. Here they held Tea Parties, lunches, dinners and lush receptions. They also presented theatre perfomances on the neighboring Olga's island. Today, the Tsarina's and Olga's islands are connected by a wooden bridge.

Olga's island is one more dream come true about Italy. This three story building, is a villa designed in a southern Italy style. It was supposed to serve as a memory, for Olga Nikolaevna, of her travel to Sicily; where in Palermo, she met her future husband Prince of Württemberg. The construction in the form of a three story tower on a high plinth, seems to be rising out of the water. On its flat roof there is a terrace set, with a nice view opening over Kolonistsky and Lugovoy Parks. The bush and arboraceous plants, the strawberry framing of the smoothly winding lanes, as well as the peacocks and pheasants in the aviaries, impart a pastoral homestead character to the ensemble of the island, with the pavilion. Reminding us of Italy, are the tender "Venus, Removing Her Sandal", cast according to the original of the sculptor I. Vitali and, the Italian gondola, a present from Venice. The very first gondola, appeared here back in 1846. The boats and gondolas on the mirror surface of the pond, the Italian music and singing, the sumptuous illumination and lights of the fireworks - all of this created an amazing image of the "Italian" corner of Peterhof. 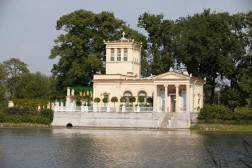