Alexandria
The Decree of Nicholas I on the establishment of the Alexandria park and the construction of the Cottage palace: «to build on the site of Menshikov's ruin a country house or cottage, with all auxiliary services and with a park»
Consecration of the Church of Saint Alexander Nevsky (the Gothic Chapel)
The Imperial Telegraph Station is opened in Alexandria. It was part of the first electromagnetic telegraph network in Russia.
Birth in the Cottage Palace of the Grand Duchess Olga Alexandrovna, the daughter of Emperor Alexander III & Empress Maria Feodorovna
Emperor Nicholas II & Empress Alexandra Feodorovna spend the first summer of their family life in the Lower Palace of Alexandria Park
Birth in the Lower Dacha of the Tsesarevich Alexei. «An unforgettable, great day for us ... At 1:15 in the afternoon Alix gave birth to a son ... I have no words worthly enough to be able to thank God for the consolation grated by Him in this year of hard trials!» - wrote Nicholas II in his diary
At the Lower Dacha Nicholas II signed The Manifesto on the Improvement of the State Order promising basic civil rights and an elected parliament called the Duma.
Watch the video
1826
1834
1859
1882
1895
1904
1905

The palace and park ensemble "Alexandria" was a place for regular summer vacations of the four generations of the Romanov dynasty. It adjoins to the eastern border of the official emperor's residence, separated with the wall from the Lower Park.

The history of this place could have been completely different, if in 1725, Alexander Menshikov, who used to own the land, had succeeded to build the grand suburban palace, "Moncourage" - "My courage". But as soon as the general-governor of St.Petersburg got in proscription, his possessions were confiscated and the palace remained unfinished. The courage disappeared and later, the empress Anna Ioannovna opened a hunting park for Tsars here, called "Yardgarten".

New page in the history of the future Alexandria started with the XIX century. In May 1826 Emperor Nicholas I of Russia issued a decree "to build on the site of Menshikov's ruin a country house or cottage, with all auxiliary services and with a park". The construction was supervised by Scottish architect Adam Menelaws. He put up the Cottage palace in the Neo-Gothic manner which was in fashion that time. Menelaws also laid out a landscape park (115 hectares).

The new page in the history of "Alexandria" began in the second part of the XIX century. In May 1826, the emperor Nicholas I, ordered to build a summer house on these lands. "A country house" or so called "cottage"… In combination with the park". Entrusting all the design and construction works to Adam Menelaws, an architect with Scottish roots. Menelaws, built the Cottage palace in the spirit of the neo-Gothic style, fashionable at the time. He constructed the service block and made a landscape park, covering an area of 11,5 hectares. With the help of master gardeners F. Wendelsdorf, N. Rodionov and A. Gombel, he successfully created, on the shore of the Gulf of Finland, one of the most interesting and original landscape parks of Russian romanticism, in the second quarter of the XIX century. The romantic spirit of this place was especially accentuated by numerous architectural constructions in the neo-Gothic style: guarding towers, cast-iron wells and the Ruin bridge over a deep ravine. In earlier times, close to this bridge, one could see the remains of the unfinished "Moncourage" palace. The park is decorated with pavilions, pergolas and garden benches. The stone sofa, carved in a huge boulder, remains intact even today.

The architect work of Adam Menelaws was continued by A.I. Stackenschneider. During twenty two years, he was rebuilding a farm created by the Scottish master, together with the pavilion. Designed "in the rural style", the roof was painted as straw, having transformed it into a Farm palace for the emperor Alexander II. In "Alexandria", the appearance of a new farm, a building for the palace telegraph center and the Konstantin's (Admiral) house, is connected with the name of Stackenschneider. These new buildings intended to accommodate the Grand Duke Konstantin Nikolaevitch, second son of the emperor Nicholas I and Alexandra Feodorovna. There is also a house for the ministerial courier, adjoining to the Farm palace. It was constructed by E. L. Gahn.

The master gardener P. I. Ehrler worked here for many years. Since the 1970's, his grave is located near the Gothic chapel - the home church of the imperial family. Built in the neo-Gothic style, according to the project of K. Schinkel, it has become one of the most original and beautiful constructions of "Alexandria".

The current name of the place, is connected with the time when, in the beginning of August 1829, Nicholas I presented the farmstead to his spouse Alexandra Feodorovna. He named the whole Palace-Park ensemble after her - "Alexandria". The humble and kind empress, Alexandra Feodorovna, created in "Alexandria", a unique world of love, family warmth and comfort. It was greatly appreciated by the royal heirs: their son - emperor Alexander II and their grandson - emperor Alexander III, who used to spend every summer with the family, in the "Cottage". For the great-grandson of Alexandra Feodorovna - emperor Nicholas II - a lower palace was constructed on the gulf shore, at the water's edge, by the architect A.O. Tomishko. Unfortunately, it was not preserved until our days.

The "Alexandria" dacha, was created by Nicholas I as a place for family vacations. In imperial families, the children were surrounded with special care. A variety of children's constructions was created in "Alexandria", for their education, training and leisure. For example, a sports ground on the south side of the "Cottage", that was recreated according to the blueprints of L.I. Linden, the gymnastics teacher of the emperor. As well as the children's fortress with its shaft, specially built according to the fortification laws of the time and, the children's fireman tower were recreated near the Farm palace. Unfortunately, the Children's country house, the Dovecote, the Children's Farm on the seashore and the Water Mill, on the creek to the east from the Farm palace, were not preserved.

The modern park "Alexandria" is a beautiful place for family get aways. The children together with their parents, can visit the gymnastic playground of the great dukes, take part in the Knight festival, participate in the interactive programs and historical reconstructions, strike the bell at the children's Fire Tower or just walk around one of the most beautiful suburban parks of the country. 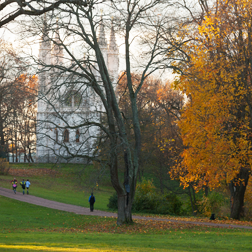 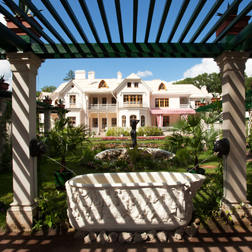 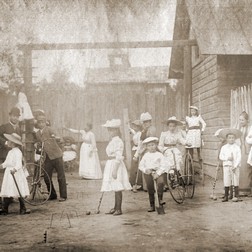 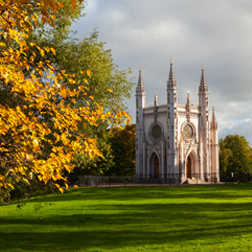 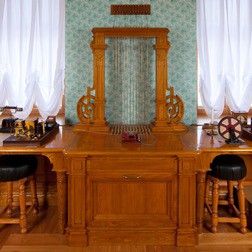 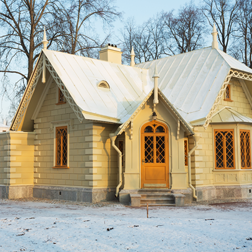