Oranienbaum
the beginning of the construction of the Stone palace of A.D. Menshikov, the first Governor-General of St. Petersburg and the closest associate of Peter I
the arrest of the Emperor Peter III in the Peterstadt fortress
the completion stage of the construction of the Chinese Palace of Catherine II, designed by the architect Antonio Rinaldi
The grandiose complex of the Coasting Hills, that became a peculiar court attraction, was completed
Grand Duke Michael Pavlovich and Grand Duchess Elena Pavlovna became the owners of Oranienbaum
the reconstruction of the «Stone Hall» pavilion into a Lutheran church
The beginning of the defense of the Oranienbaum bridgehead
The hand-over of the palace and park ensemble to the operational management of the Peterhof State Museum-Reserve
Watch the video
1711
1762
1768
1774
1831
1902
1941
2007

The history of Oranienbaum goes back to the beginning of the XVIII century, when the closest fellow campaigner of Peter the Great, Alexander Danilovich Menshikov, constructed a homestead with a palace and a regular park opposite Kronstadt. Oranienbaum was meant to be a part of a grand panorama, meeting all the visitors to the new Russian capital by the sea. The Grand Residence of the "first" nobleman of the country, should also be perceived as a symbol of the Triumph of Russia, that prevailed in the Northern War.

Translating from German language, "oranienbaum" means "orange tree". The legend connects the history of the name, with the episode from the Northern war when, on the territory of the future Menshikov's grange, a small glasshouse of orange trees was found with the inscription: "ORANIENBAUM", written in big letters over each of them. The find pleased Peter so much, that he desired to give this name to the homestead. It's also known that, back in 1703, he named one of Menshikov's patrimonies in the neighborhood of Voronezh, Oranienburg. The image of the orange tree with its bright orange fruits, became the main emblem of the Oranienbaum coat of arms.

After Menshikov's proscription, the homestead was transferred in possession of the Admiralty board. But already in 1743, the empress Elizabeth Petrovna granted it to the crown prince, the grand duke Peter Feodorovich and his spouse, the grand duchess Catherine Alekseevna. This way, Oranienbaum became the residence of the smaller courtyard. On the territory of the Upper Park, a "funny" fortress was constructed for the amusement of the future emperor. It was called "Petershtadt", and was built according to all the rules of the art of fortification. Nowadays, the resembling fortification gates and the palace of the overthrown emperor, remind us of the short reign of Peter III.

The ensemble of the "Private Dacha" takes a special place, in the history of the Russian culture. It was devised as a suburban residence by the empress Catherine II, back when she was a grand duchess. With the Chinese palace for receptions and, the slide hill for summer entertainment.

At the end of the XVIII century, Oranienbaum became the property of the Grand duke Alexander Pavlovich (Alexander I). Later, it was the summer residence of the younger brother Mikhail Pavlovich. His daughter Ekaterina Mikhailovna, in marriage, as the duchess Mecklenburg-Strelitzkaya, and the grandchildren - Elena, Georgiy and Mikhail, who lived in Oranienbaum up until their emigration, cherished the heritage of their ancestry.

After the revolution of 1917, Oranienbaum palaces have been nationalized. The palace constructions accommodated new services: educational and military institutions, as well as hospitals. The hardest trial for the former grand duke's residence, was the Second World War, when Oranienbaum appeared in the Nazi besiegement. The defenders of the legendary Oranienbaum "pocket", after having withstood the enemy onslaught, kept that small piece of land, that became the defense base. Thanks to the courage of the Russian soldiers, the residence preserved the authentic palaces and pavilions in addition to keeping the museum collections.

In 1948 the town was named after Lomonosov, in honor of the great Russian scientist who, in 1754, founded a colored glass factory near to Oranienbaum, in the village of Ust-Rudica.

Nowadays, Oranienbaum, that has remained in oblivion for a long time, is starting to resurge. The doors of the Grand Menshikov Palace have been opened to visitors, the park is being put in order and, after a long and difficult restoration, part of the Chinese Palace interiors is open.

The "Oranienbaum" Palace-and-Park ensemble, that kept its original appearance, is a brilliant page in the history of the country's art culture. 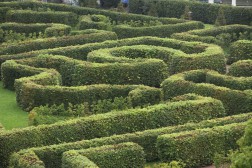 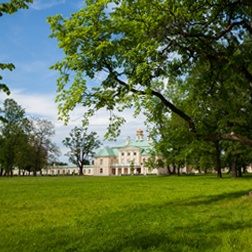 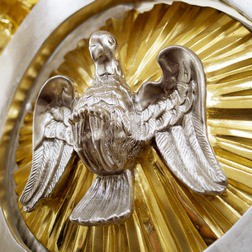 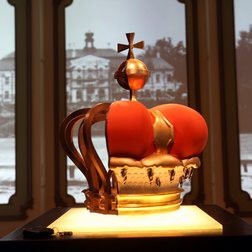 Oranienbaum through the Ages 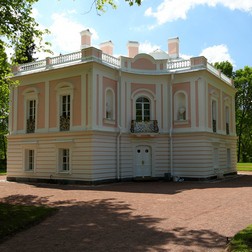 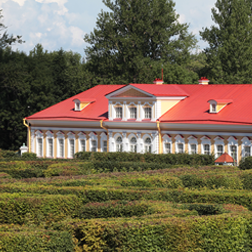 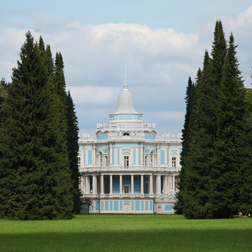 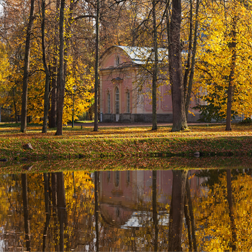 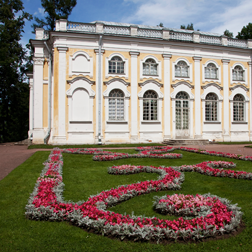 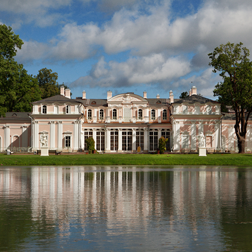